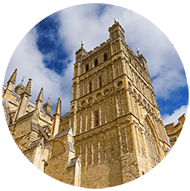 We are lucky to get widespread support from around the city and beyond. Much of our core work is funded through donations to our share scheme or by applying for  grants from charitable trusts such as the Big Lottery Fund or local authorities such as Devon County Council. We also have contracts to run three  children’s centres in Exeter until 2017.

We work closely with many other local organisations such as St Petrock’s, a centre which supports the city’s homeless and Turntable Furniture, both of which began life as ECI projects.

We are also supported by staff at the Exeter White Stuff store who are raising money for us. And we have been generously supported by the Beautiful Days Festival.

Please view the video for a lovely insight into ECI's work over the last 20 years. Many thanks for everyone's input into the video and to everyone that has played their part in ECI's history.